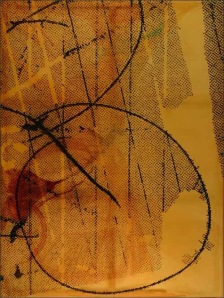 Some information about Polke’s  Dallas/London Exhibition in 2002 to 2004:

The last Tate Modern exhibition of Sigmar Polke’s work ran for three months from the of autumn of 2003 into 2004. That exhibition was titled : Sigmar Polke: Recent Paintings and Drawings 1998 – 2002 and was the result of a collaboration between Polke, The Dallas Museum of Art and Tate Modern. It ran in Dallas from 15 November 2002 to 6th April 2003 and then in London from 2nd October 2003 to 4 January 2004.

The Directors of both Museum’s wrote a joint forward in the book of the exhibition, in which they describe the exhibition in various ways. They note the powerful contemporary political resonances of Polke’s work : “With the exception of the abstract triptych, all of the large new paintings shown in Dallas were, however, created after the terrorist attacks struck New York and Washington on 11 September 2011 ( and they would seem prescient of the war that commenced in the spring of 2003 between Iraq and the coalition forces, principally those of the United States and the United Kingdom), and from each of these pictures, richly varied in subject, emanates a sense of fear, intimidation, or incipient violence. When the new paintings were installed by the artist in company with the revealing supportive imagery of the “machine paintings”, the whole body of work took on an unmistakeable aura of machismo, not that this is a personal characteristic of the artist but that the work depicts a current global condition in which two cultures – the modern West and significant elements of the Islamic world are colliding. The presentation of source material related to the gun culture of the american West surely relates to the United States current top political leadership, which is Texan, but there is no finger pointing or position taking. ” p7-8.

Charles Wylie , in the same book, writes of Polke’s preparation for this exhibition when he receives a message from the artists studio in Cologne. Polke wanted newspapers from all over Texas. As he has since his mid 1960’s capitalist realism days, when he founded that ironically named, tangentially pop art-orientated movement with his fellow artists Gerhard Richter and Konrad Lueg, Polke would select images from the paper’s ecosystem of ads, cartoons, diagrams, photographs , illustrations, and other pictures to make his work.” Wylie goes on to locate this remarkable exhibition as coming from Polke’s consistent investigation into “the terrain of the collective visual culture and has been a major force in turning art from its source in a romanticized nature to a mediated culture as subject.” p11.

One of the core images of the exhibition comes from a large “machine painting” that Polke hung near the start of the show, which is taken from a German newspaper diagram illustrating the ‘Hunt for the Taliban and Al Queda’. The illustration shows a small group of fighters on horseback being located by surveillance satellites and then tracked by a drone. That image of the horse riders becomes the central motif In a monumental abstract painting, I Live in my Own World, But its OK, They Know Me Here.

The theme of these soon to be obliterated riders repeats through the exhibition and is one major reason that Wylie can plausibly claim that this was an exhibition ” of astounding scale and thematic breadth that involved, among other things, ideas and images about perception, vision, surveillance, art, history, military power, printing mistakes, painting, sex and guns.” Throughout a long and highly productive life as an artist, my thought is that Polke held onto and developed a radical vision of what art can offer the world. But he has never been a propagandist – his work is enfused with the high premium he has placed on the role of ambiguity and multiple perspectives.

With Sigmar By the River 1. Oil on collaged artists note paper. 2014 Andy Metcalf. In Private Collection.

I  have a patchy kind of connection to Sigmar Polke and his work. Looking back it could see to me that its almost been by chance.  The faint threads of connection  between us seem too  insubstantial to write about.  I appreciate that,  I am being ridiculously presumptuous to link myself to his work. I can agree with that . But I also want to write –  he  has been an inspiration to me. His work has helped me. Through him I can see some sort of a path I can sometimes follow in my painting.  He is a diverse artist and that is my intention too.  Its taken me a long time to make even these inconclusive threads to him, and with him.  Its taken me a lot of time to understand  that we can’t go back to the old ways, the old blissed  out union with romanticised nature or the female form, or an inner state of mind.

Also I  am fairly new to his work. I remember quite vividly going to see the 2003/2004 Tate exhibition ( see more below). I was struck by the work. Held by it.  It stays with me,   but  paradoxically  at that stage in my cultural life, I did not really get it. I saw him doing something  somewhat  Warhol  with his Texan gun culture paintings.  I did not take in the way the whole exhibition is a sustained radical  counter blast to core western values and positions, most obviously through his rendering of  the Bush/Blair/Drone war nexus. In that exhibition he shows us the other side of the western dream in a powerful series of sombre, dark, death ridden paintings.

Then, two years ago, in the way these things go, in an oblique, hidden, unconscious way,  I went on to the  Cable Car across the Thames in East London and took photographs from high up over the sludge green/brown water. And from the ground made sketches. As they taught me to do at Art School. And then,  as is the way, I had to spend many months not knowing what to do with this material.  Finally I was helped out by  a deadline – making my debut in May 2014 at the Crouch End Open Studios weekend . I was also helped by the chance of going back to look Polke’s images in the book of the 2003/4 Dallas/Tate Modern exhibition.  Slowly, through the painful work of preparatory paintings,  I began to see a way forward for me in using the high point of view, the surveillance point of view.  Undoubtedly, somewhere not quite in full  consciousness,  I was also accessing the importance of the Snowden revelations, which have shown us  that we have  been moved ( without our consent ) into a Surveillance  world.  And at the same time, re-looking at the photos of his paintings, I was gripped by the way Polke combines  ‘mechanical’ painting ( via the  half tone digital   printing of newspaper images ) with organic shapes  and painterly gestural marks. I  plan to keep on experimenting around these contours.

He, much more than either Warhol or Lichtenstein,  does not do EITHER/OR but instead does BOTH.

Now I am working on an extended series of these paintings – the image at the top here is of the first one. This blog is one way of paying tribute to the guidance and inspiration he has provided for me, even though I have never met him. The inspiration is also that he has shown it is possible to inhabit an anti western establishment  political stance   without becoming crassly propagandistic.

In July 2014, I went to Zurich and saw, entirely by chance,   his Stained Glass Windows in the Gross Munster Church in Cenral Zurich. I will post about this encounter shortly.